Last year, inspired by the Kintalk Anzac Day Blog Challenge, I blogged about the impact war had on my family.
It’s heading to Anzac Day, and the challenge is on again.

I want to support my colleagues, so I wondered what I could talk about this time around. Then I remembered discovering a war grave in the cemetery near my family’s bach. 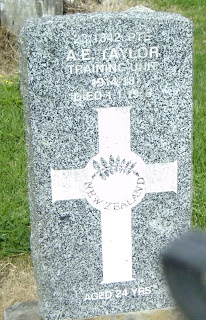 Some of the graves used to be neglected. Because my father is buried there (the most recent addition) my family started clearing the weeds around other graves. Prompted, I like to think, by this action, somebodies did major weed clearing and tidying up of the graveyard. Once we could see the graves, we realised there was a war grave hidden amongst the very-small number of graves.


My librarian-senses kicked in and I wanted to find out more about Private A. E. Taylor, who died at Trentham on 1 January 1916, aged 24 years. We speculated about his death. Training accident? Drunken accident on New Year’s Eve?

The true story was much, much sadder. He was a victim of one of the many meningitis outbreaks that swept through Trentham camp, almost since its inception.


I found this out by searching the wonderful Papers Past database. Because I couldn’t remember his name, I searched for the name of the settlement, and narrowed the dates. His death was reported in three newspapers through Papers Past (Evening Post ‘Death from meningitis’, Ashburton Guardian ‘Death of a soldier’, and Wanganui Chronicle ‘Meningitis at Trentham’). All say much the same thing. This is from the Evening Post, 3 January 1916:


A private in E. Company, 9th Reinforcements, named Arthur Edward Taylor, died at Trentham Hospital on New Year’s Day, from cerebro-spinal meningitis. He was taken ill suddenly last week. Deceased, who was 24 years of age, was a son of Mr John Taylor, of Whakapirau, North Auckland. His body was sent north today for interment.

Move on a year… and I’m reading Nice Day for a War – written by Matt Elliott, illustrated by Chris Slane. It’s based on the experiences of Cyril Elliott, Matt’s grandfather. There, on page 18, I read:

In the first month at Trentham, bad weather plagued the development of the camp and the training of the men. This was an early introduction to the mean of being ‘on fatigue’, as drains and other amenities were dug to help prevent Trentham becoming nothing more than a bog. As thousands of men moved around the camp, the site became very muddy. The mud began to smell. As the rain continued to pour, it was impossible to properly dry out huts and tents. Illness became a problem, and in early July 1915 the camp was evacuated due to an outbreak of meningitis. The 1st and 2nd Battalions moved at very short notice to Rangiotu, between Palmerston North and Foxton. However, such was the rain that they sheltered at Awapuni Racecourse for several days before moving on.

This outbreak was subject to an inquiry, reported in newspapers I found on Papers Past. Searching it for meningitis and trentham, 1 January 1914 – 31 December 1919 I found over 600 entries. Even if many of them were pretty much identical – there was something bad going on. The Evening Post called it ‘Camp Mystery’, while The Marlborough Express was much more forthright: ‘The Trentham Scandal’. It contains such scathing lines as:


It is good to know, by the report read to the House last week, that there was no typhus at the camp; but reading between the lines of the report, and considering such evidence as has already been given before the Commission, it is quite clear that camp arrangements were very far indeed from what they might and ought to have been. It is all very well for the Hon. Mr Rhodes, who has, it appears, blossomed forth in a new role, that of “Assistant Minister for Defence,” to prate about the proceedings before the Commission being sub judice, and that consequently neither Members of Parliament nor the press should dare to say a word about what has taken place and is taking place at Trentham until the Commission reports, as it is expected to do, in about three weeks’ time. Neither Members of Parliament nor the newspaper are to muzzled in this way…

So sad that such illness continued to destroy our troops. To think that Florence Nightingale battled against deaths by disease in the 1850s. One of her methods to illustrate the extent of the problem was the famous Rose Diagram which highlighted that many, many more soldiers were dying from disease than from injury, or other causes.

So sad that this young soldier – and so many others, like Privates David Booth Doggett and Walter Ford, just to name two – died before leaving New Zealand to fulfil their duty to King and Country, as they saw it.

The Cenotaph database, from Auckland Museum, also has a record of Pte Taylor. I suppose, if I wanted more information, I could follow up with Archives New Zealand to see their records. But, maybe I’ve found enough. I know his name. I know who his father was. I know how he died.
Posted by Madhamster

Thanks for visiting and sharing... please share your name, too...
I'm going to check the comments first - and it might take me a while to remember to look - sorry!

the madness of hamsters

Stuff I've burbled on about previously

Fans and proud of it